“When I was in sixth grade, I wanted to be a missionary,” says Zimmerman, who grew up in a family of 11 in St. Viator Parish in Chicago’s Old Irving Park neighborhood. At 14, he began studying at the Saint-Jude Seminary in Momence. He earned a degree in philosophy before earning his degree in theology from the Catholic University of America in Washington, DC. Ordained a priest in 1963, Zimmerman, who learned Spanish, spent five years as a missionary in Guatemala although he nearly died of hepatitis.

‘I’m one of the few Catholics to have received all seven sacraments,’ says Zimmerman, who was baptized, confessed, communicated, confirmed, ordained, received so-called last rites when ill, and married in 1974. He resigned from the priesthood in 1973 when he felt the progressive momentum of Vatican II had waned.

The details of model shipbuilding are so intricate they can be intimidating. But amateur Greg Zimmerman says the secret is to work on small sections.
– Brian Hill | Personal photographer

He met his wife, Jane, while they were part of a European trip to the Spanish home of the founder of the Claretian Order. They both later attended Loyola University, where he earned his master’s degree in counseling psychology and she attended nursing school. A former Associate Director of Nursing for the DuPage County Health Department, Jane’s passions include piano and guitar, writing, sailing, and leading a mindfulness and meditation class at Monarch Landing. . She also helps with her husband’s shipbuilding.

“I gave the plans to my wife and she sewed the sails,” Zimmerman says, pointing to his detailed work on the 1765 three-masted warship Norske Love.

He was in his late thirties when he received his first model – a 19th century clipper called “Flying Fish”. He spent six months completing the project and immediately took on the biggest challenges of “plank on frame” designs, where the hull planking is laid piece by piece on the frame, as was the method used by builders. real ships.

“When you first look at plans, you get intimidated,” Zimmerman says of large instruction sheets with hundreds of steps that make assembling an IKEA entertainment center simple. “You’re like, ‘Oh, my God, this is going to take me a century.'”

The secret is just to work on a small section.

“I get great satisfaction watching a section I just finished. It looks great and I move on to another section,” says Zimmerman, who also waxes all the strings used in his models to keep them from rotting. “You’re building something that was structured years and years ago, and now it’s coming back to life.” 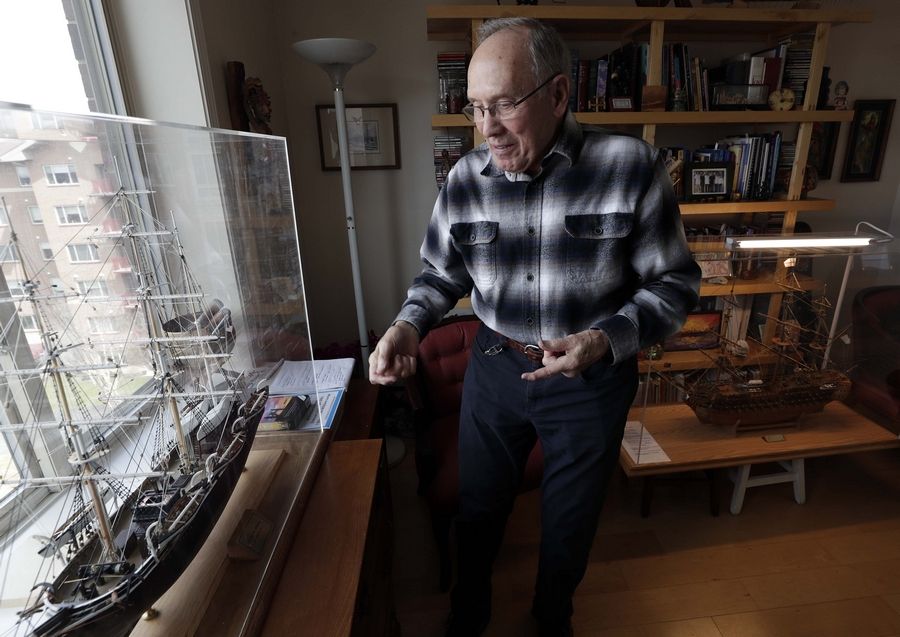 After completing his model of the USS Constitution, the wooden-hulled three-master nicknamed “Old Ironsides” for its heroism in the War of 1812, Zimmerman traveled to Boston, where he was able to walk the ship launched for the first times in 1797. He knew the ship inside and out because of his work on the model.

“It was like a week old house,” Zimmerman says. “That was cool.”

He hopes to visit the Mystic Seaport Museum in Connecticut to see the life-size version of his Charles Morgan model of the 19th-century whaler, which contains detailed test pots used to convert blubber into whale oil on deck. Smaller whalers have even more detail. “I took a piece of wire, hammered it, and filed it down like a little harpoon,” Zimmerman says.

His model of the San Felipe, a Spanish galleon launched in 1690, features brass cannons and lanterns. “The back part I had to carve out of wood,” says Zimmerman. “I’m not a woodcarver, but it turned out fine.”

He spent two years building HMS Victory, the English ship that Admiral Horatio Nelson used to win the Battle of Trafalgar on October 21, 1805. In addition to construction work, Zimmerman studied ships and their crews.

“It took 6,000 trees to build the Victory; 2,000 of them were oak,” says Zimmerman. With 350 men on each deck, the English filled the ranks with prisoners, who were chained to the guns. Women were brought on board to appease the men holding these weapons.

“If a child was born from this union, they called him a gun son,” Zimmerman says.

Disciplinaries with multi-tailed whips called a nine-tailed cat would punish sailors who misbehaved. This led to the phrase “Don’t let the cat out of the bag,” Zimmerman says. 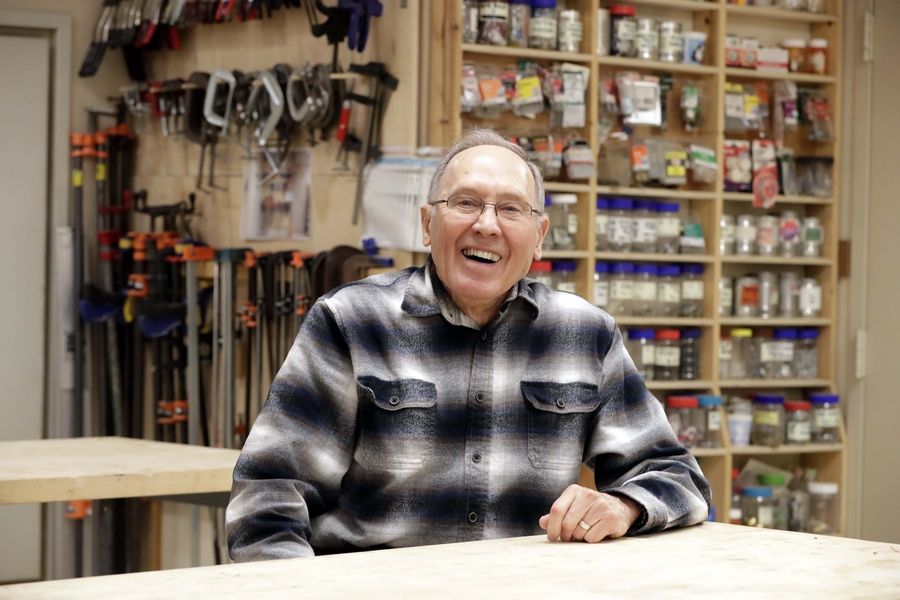 A lifelong learner, Zimmerman hosts Monarch Landing’s discussions of the Civil War. On its bookshelf, the New Jerusalem Bible shares space with the Torah, Quran, Bhagavad Gita, and other religious books, as well as “Joy of Cooking” and “The Complete Idiot’s Guide to T’ai Chi and Qigong”.

His most expensive boat model had a list price of $1,200, but he found it on sale for half price. He notes that he still spends less on his hobby than most golfers spend on theirs. Some of his ships will go to the couple’s adult children – Sarah, Michael, Elizabeth and Gregory – or their 10 grandchildren.

“If you ever want a cool hobby, this is it,” Zimmerman says. “I could keep you here all day. It’s so rewarding. Eventually it becomes a discipline. You get really good at it. The skills will come. Don’t worry about it. It will happen.”

At his post in the carpentry shop, a sign reads: “I am the captain of this ship and I have my wife’s permission to say so.” Another features the Latin motto, “In Medio Stat Virtus,” which translates to “virtue stands in the middle.” Zimmerman sees it as “everything in moderation”.

Even with his beloved shipbuilding, Zimmerman practices moderation, limiting himself to a few hours a day. But his time in cabinetmaking led him to discover mandalas, the geometric configuration of symbols, often spiritual, which are a popular art form in Eastern religions. He has already created a few mandala artworks.

As Zimmerman has said many times before, “I have a new passion.”