For generations, Emanuel Tabi has watched his community work the land for agriculture. He has also witnessed generations of “galamseyers”, small illegal gold miners whose prospecting has contaminated the nearby Birim River.

Tabi is the congregation member of Sagyimase, a small community located at the far end of the Atewa Forest Reserve, one of Ghana’s last remaining primary tropical forests. A long time ago, says Tabi, “our fathers made us understand that it is because of this forest that we benefit from the type of rainfall that we have, so cocoa, cassava, plantain grow very well in this region. .

MP Emanuel Tabi, pictured here at home with his granddaughter, has been actively involved in the campaign against bauxite mining in the Atewa region (Image © Thomas Cristofetti / Ruom)

It was after engineers started clearing the access roads into the forest to allow for bauxite prospecting and possibly other destruction that Tabi decided to act. He is a member of Concerned Citizens of the Atewa Landscape, one of seven local groups and four citizens who are suing the government in Ghana’s High Court to stop mining in Atewa.

Indeed, in 2017, Ghana concluded an agreement with the main Chinese investor to develop an aluminum industry in Ghana. Atewa has been designated as one of three supply sites for bauxite, the main ore of aluminum. 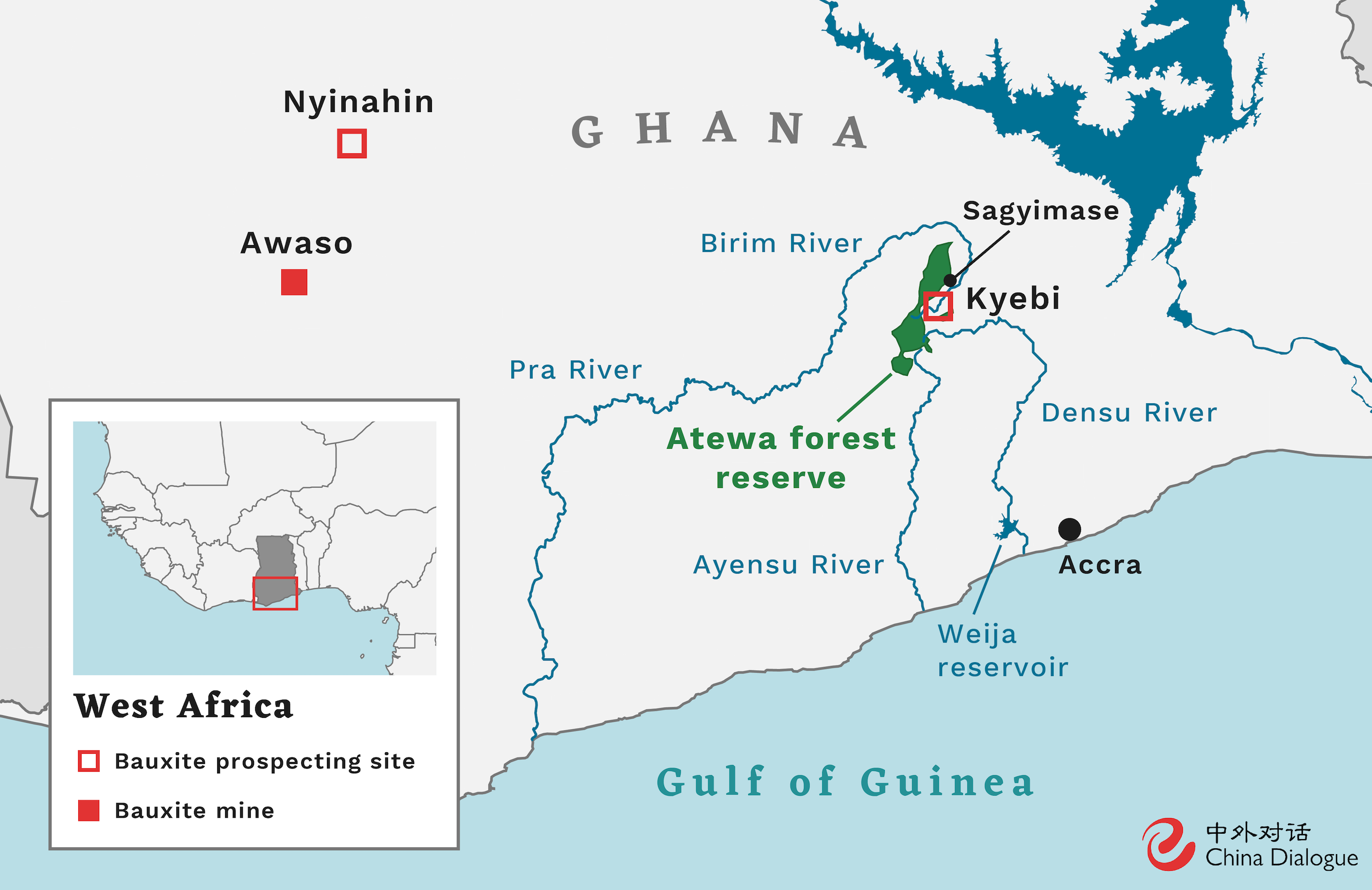 Under Atewa is about 150 million tonnes of rock. The $ 2 billion barter deal was finalized in 2018 and China would be reimbursed through sales of refined bauxite. In exchange, Ghana has roads and interchanges built by the Chinese state-owned company Sinohydro. But as the source of three great rivers, activists say mining poisons the water of five million people. 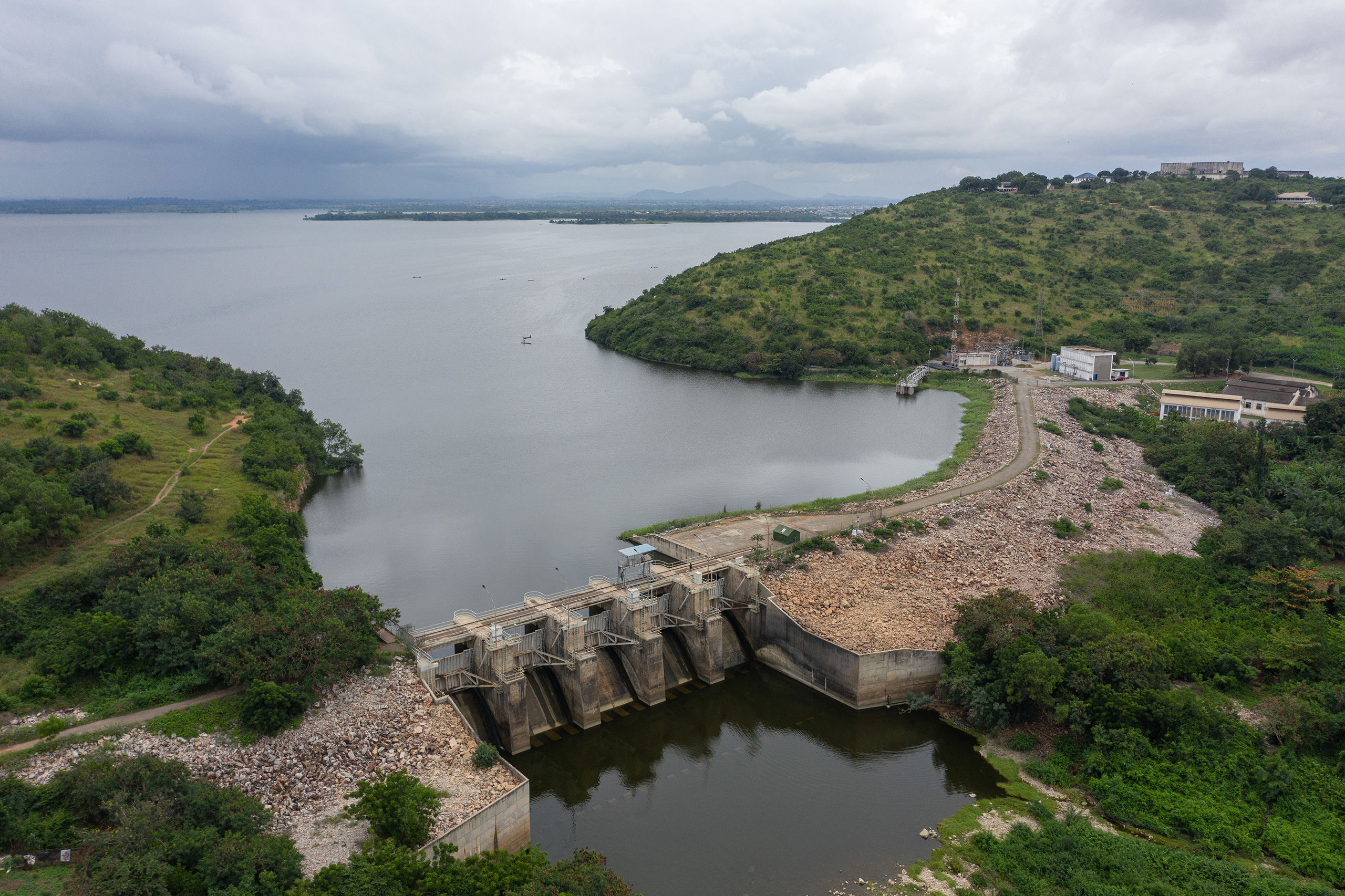 The Weija Reservoir supplies water to Accra, the capital of Ghana. It is filled by the Densu River, which originates in the highlands of the Atewa Forest. Campaigners say bauxite mining in the region could contaminate water for five million people. (Photo © Thomas Cristofetti / Ruom)

Covering 230 square kilometers, Atewa is of critical environmental importance. More than 100 species on the brink of global extinction live in the forest. It contains three-quarters of all remaining tropical rainforests in Ghana, according to Rainforest trust. And it is home to one of the last untouched areas of the Upper Guinean Forest, which once stretched across West Africa. As one of the most fragmented but biodiverse ecosystems on the planet, the Upper Guinean forest is home to a quarter of African mammals.

Atewa is classified as an area of ​​global importance for biodiversity (GSBA) and a protected forest reserve. All mining activities are supposed to be excluded. Considered the lungs of the earth, these types of forests absorb carbon dioxide and produce oxygen in return, regulating precipitation. 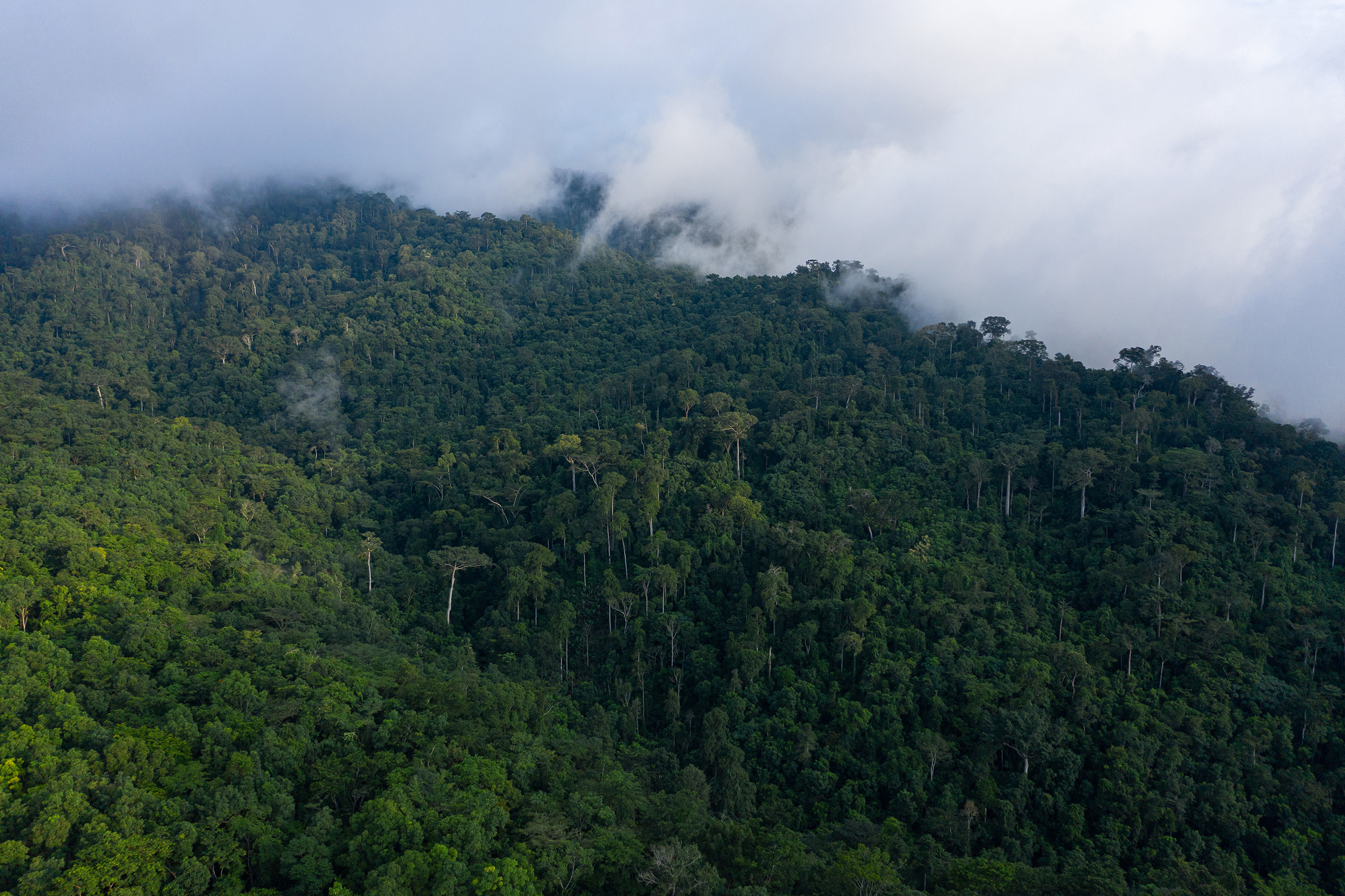 Among the complaints filed by local groups on July 1, seen by China Dialogue, is the exploitation of bauxite in Atewa violating their constitutional right to life and to a clean and healthy environment.

Court documents also claim that the Ghanaian government violated the Minerals and Mining Act 703 of 2006 by test drilling at Atewa in May 2019 without a permit.

But in a statement of defense, seen by China Dialogue, the Ghanaian government demanded the dismissal. The Attorney General of Ghana replied that not all Atewa is designated GSBA and therefore can be mined. 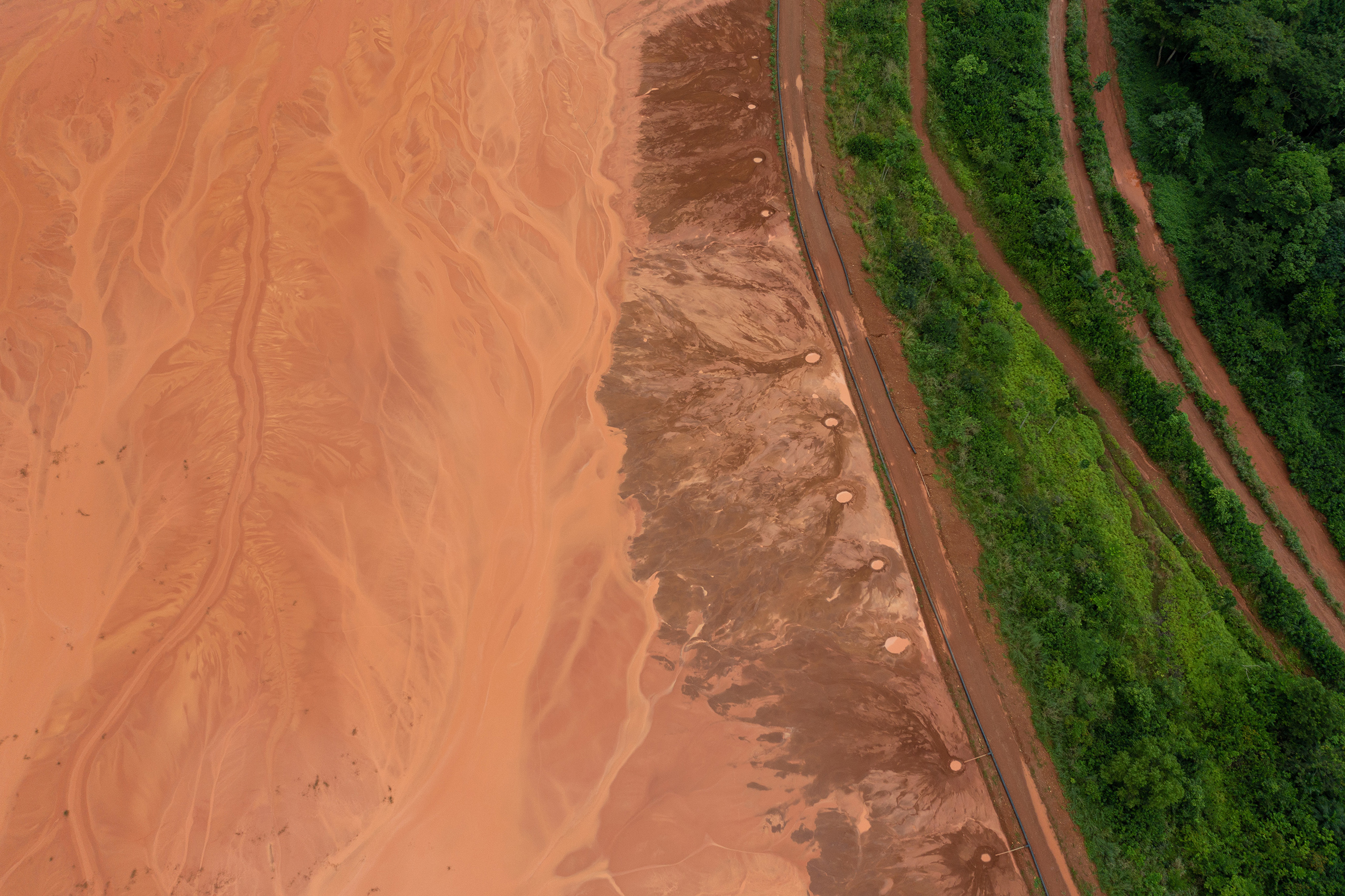 The Ghana Integrated Aluminum Development Corporation (GIADEC), the government agency created to implement the plans, maintains that the agreement will provide infrastructure. “What we want to do with this bauxite deal is mine it for the benefit of the community,” deputy general manager Akwasi Osei-Adjei told China Dialogue.

“We think that this can attract a lot of the facilities that they lack in these communities, because in these farming communities the income levels are quite low, but with mining employment will be created, and with that the schools can be expanded, the main roads, then [piped] water and electricity.

He added: “Creating this kind of infrastructure at this level is expensive. 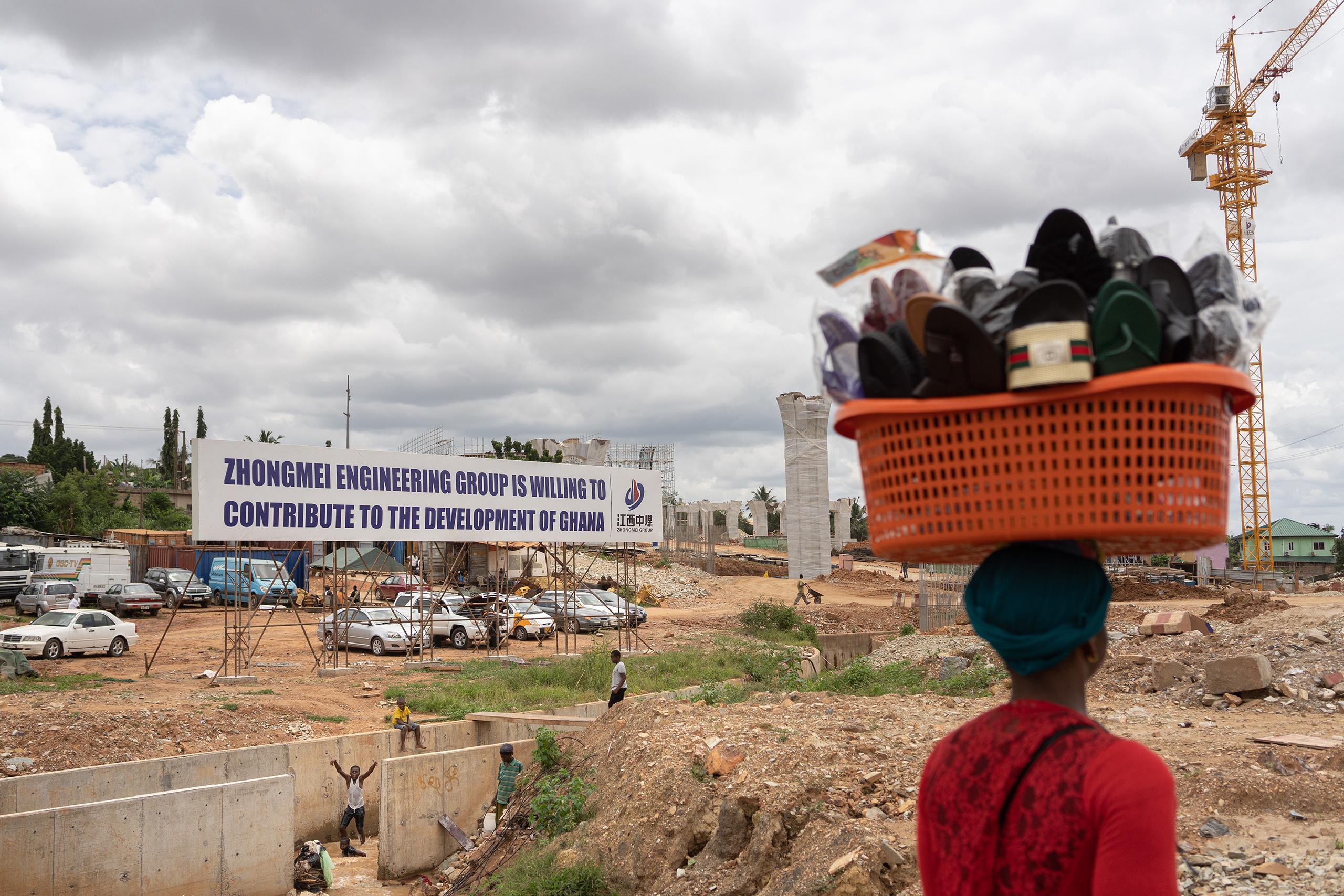 A bridge under construction near Accra, the capital of Ghana, is part of the new infrastructure promised by China in exchange for bauxite (Image © Thomas Cristofetti / Ruom)

“We are not against the government’s plans to develop the economy. We think it is very important to create more jobs for Ghanaian citizens, ”said Richard Pomeyie, member of the Ghana Youth Environmental Movement. “What we are against is forest mining.”

In Rocha, one of the conservation NGOs suing the government, believes that Atewa could produce about US $ 450,000 in tourists per year as a national park.

“This is one of the alternatives offered to the government,” Pomeyie said.

More and more locals are joining the campaign to save Atewa, fearing that Chinese companies will have a negative environmental impact on Ghanaians. 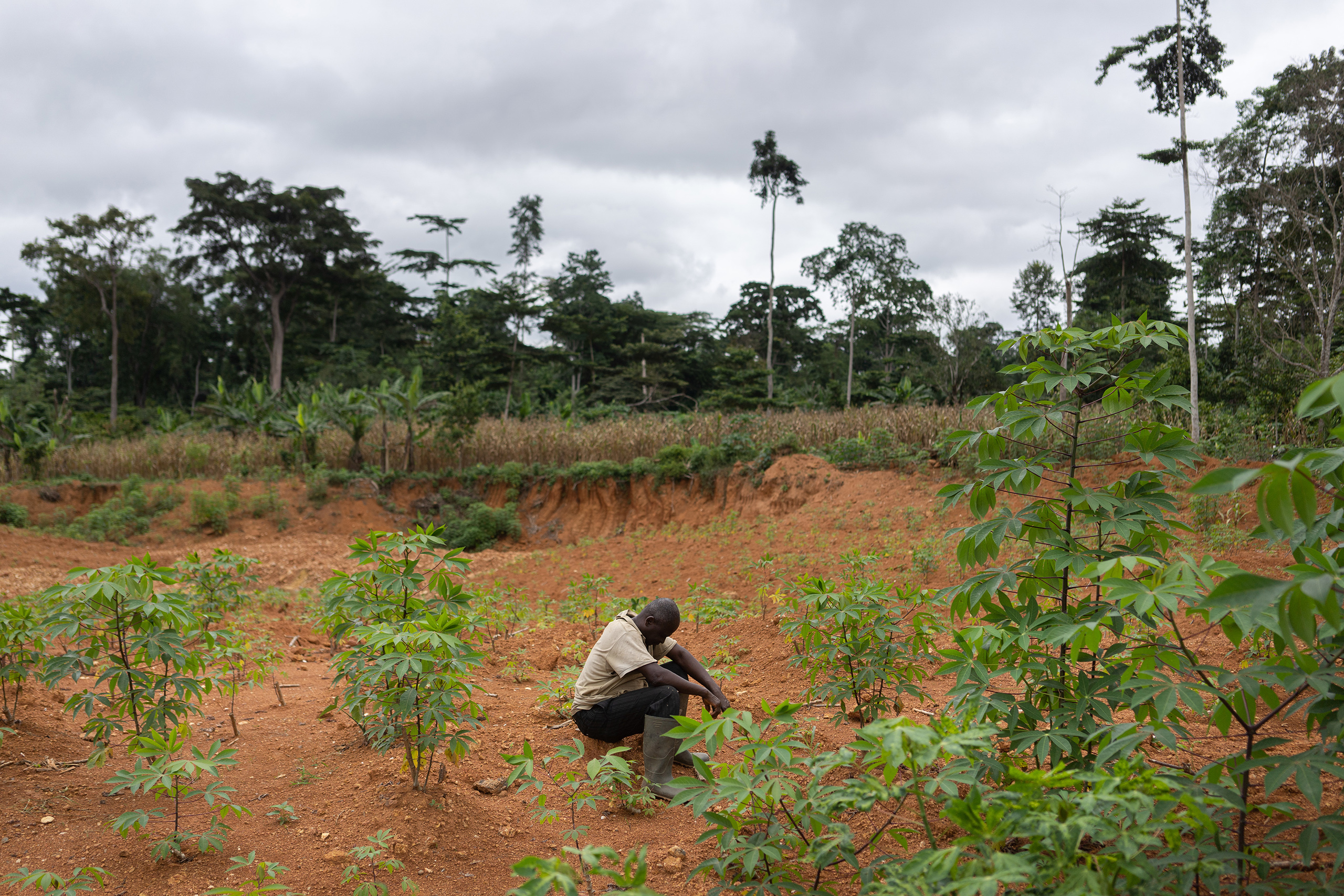 The remains of a small gold mine in Kyebi near the Atewa forest. The area is dotted with excavations like this where topsoil has been removed and contaminated water collects in ponds. (Photo © Thomas Cristofetti / Ruom)

A story of uncontrolled illegal mining supported by Chinese donors has ignited the debate. Ten years ago, more than 50,000 Chinese migrants sought wealth in Ghana’s small-scale gold mining sector. The 2013 crackdown by former President John Mahama resulted in the expulsion of more than 4,500 Chinese workers.

But that failed to curb trade, leaving Ghanaians looking for tougher measures. The deportation of Aisha Huang, nicknamed the “Queen of Galamsey”, in 2018 was all the rage. Many believed that the government of current President Nana Akufo-Addo did not prosecute Huang because of China’s political influence over the Sinohydro deal.

“Aisha Huang was not part of the discussion,” was forced to clarify Minister of Lands Kwaku Asomah-Cheremeh during a press briefing in April last year.

Ghana saw a 60% increase in primary forest loss between 2017 and 2018, the largest increase in the world according to environmental research group World Resources Institute, which released the data as part of its Global Forest Watch program. . Deforestation was linked to agriculture, such as cocoa production and mining. 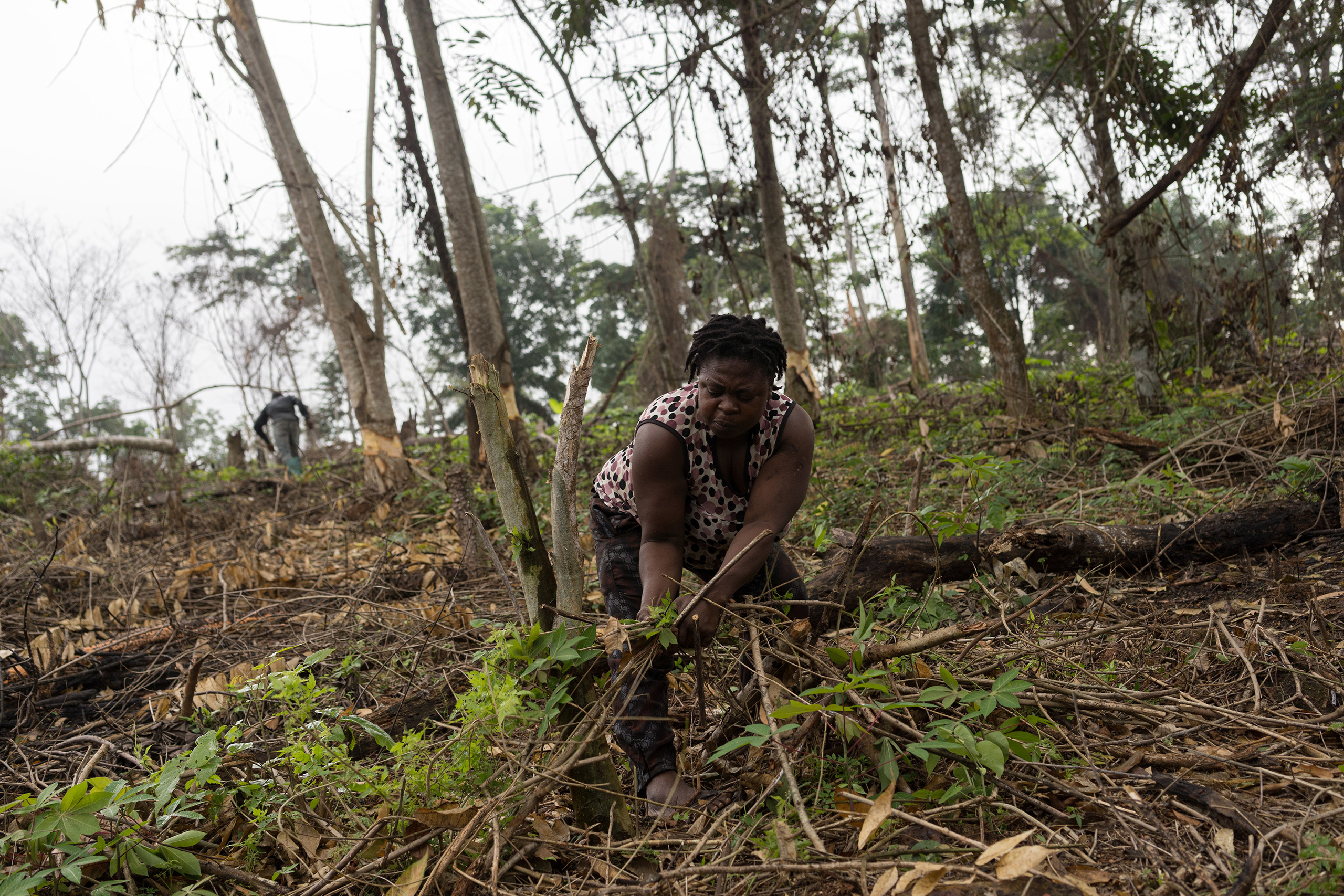 Sagyimase villager Vida Dede and her husband clear part of the forest next to the Atewa reserve allocated to them for agricultural purposes. Vida Dede believes the mining project will benefit the local population by creating new employment opportunities. (Photo © Thomas Cristofetti / Ruom)

Although there have been improvements with new data showing a 50% drop in losses for 2019, “we would like to see three consecutive years of decline to be very sure… that this is a real sustained trend,” said Caroline Winchester, Global Forest research analyst Watch, at China Dialogue.

“Ghana deserves a round of applause,” Winchester added. “It is the third country in the world to have signed an agreement with the World Bank in which they can receive financial rewards to reduce deforestation and degradation.

And that’s why environmental groups think the Sinohydro deal is at odds with it. Activists are not protesting for a complete stop to bauxite mining, “but so that it does not affect critical ecosystems like Atewa,” said Daryl Bosu, deputy national director of A Rocha Ghana. He pointed out that the World Bank estimates that deforestation cost Ghana about US $ 400 million annually. 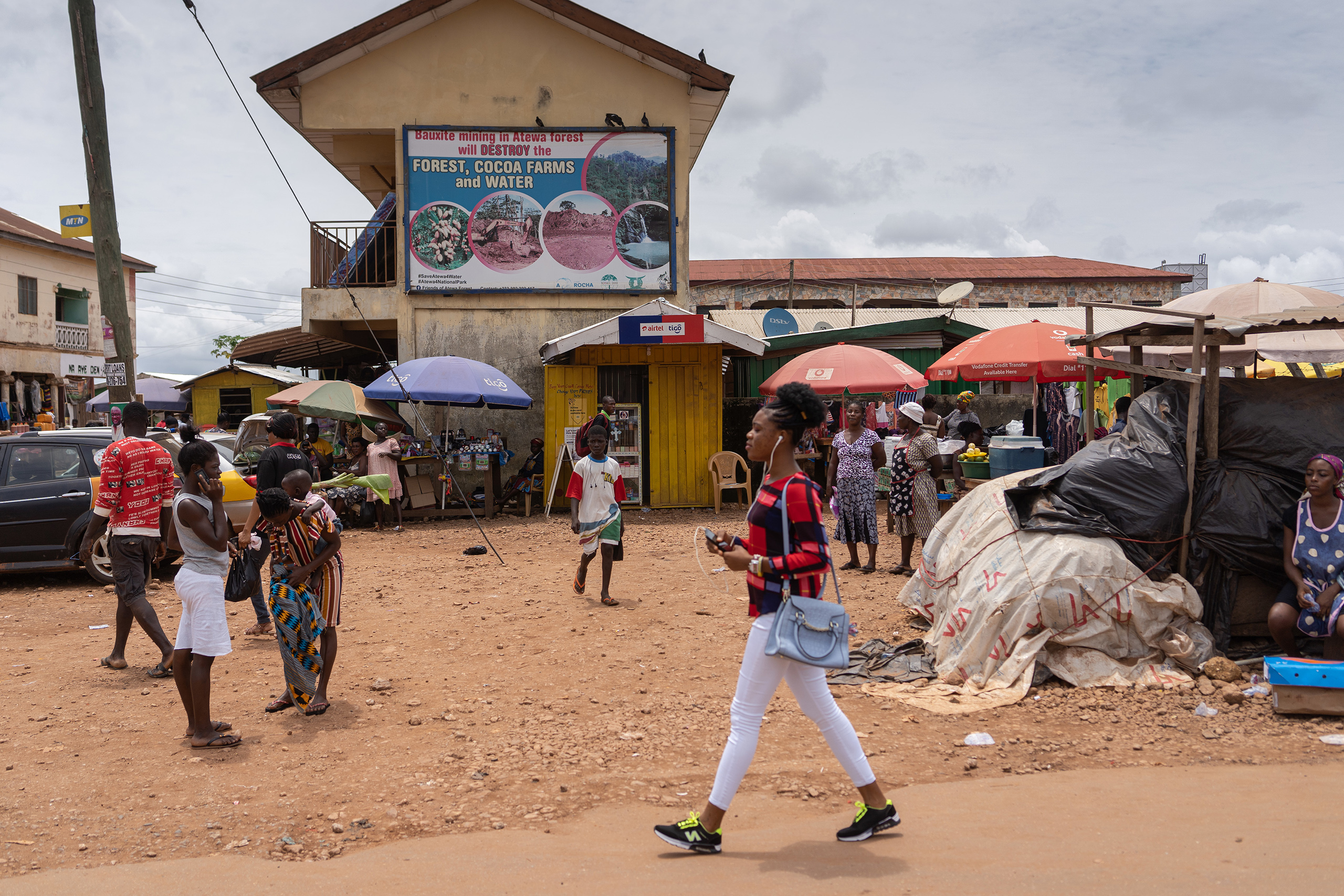 A notice board in Kwabeng on the west side of the Atewa reserve, as part of the campaign against bauxite mining in the area (Image © Thomas Cristofetti / Ruom)

Campaigns to stop mining in Atewa have been underway since 2017 with marches, billboards and an online petition with over 30,000 signatures. He got the support of actor Leonardo DiCaprio on social networks.

The Sinohydro deal has been widely condemned not only for its environmental impact. It is part of a larger US $ 19 billion loan deal between Ghana and China. The 2019 IMF report warned of Ghana debt risks given the high capital required to refine bauxite coupled with lower aluminum prices.

This was taken up by a critical report from the Natural Resource Governance Institute on how heavy borrowing against resources has led to major debt problems in Africa and Latin America. African countries have taken out at least $ 66 billion in loans from China since 2004. Two state-owned banks, the Development Bank of China and the Eximbank, accounted for 53% of loans, according to the think tank’s 2020 report. non-profit. 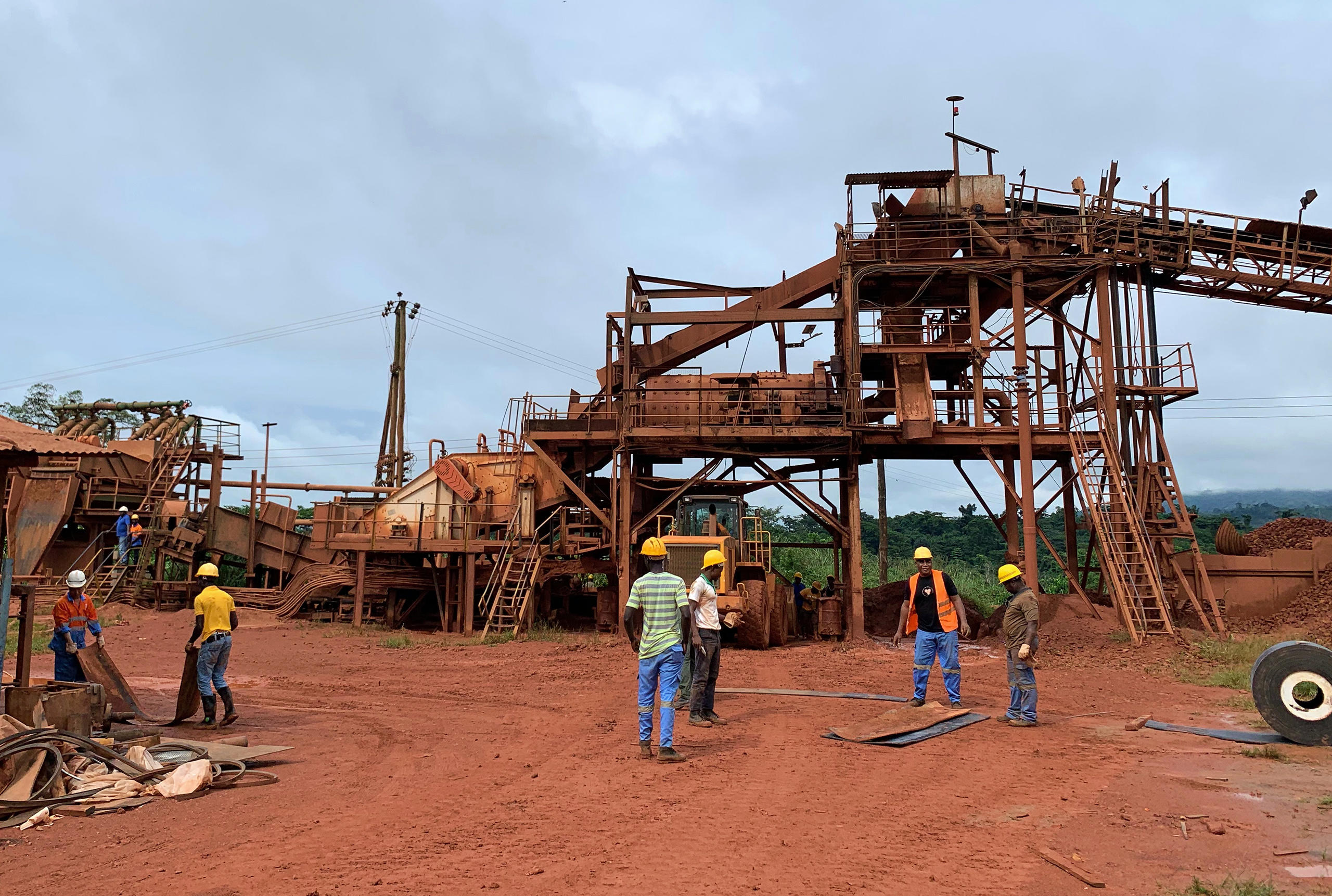 So it’s no surprise when in April the International Monetary Fund approved a US $ 1 billion loan to counter Covid-19’s major blow to Ghana’s economy, citing trade disruptions with China. as the initial engine of the country’s financial difficulties. He predicted that Ghana’s debt would reach 69% of GDP, up from 63% in 2019.

The Ghanaian government appears determined to operate Atewa and the other two sites at Awaso and Nyinahin. “Plans are well advanced for us to mine the bauxite so that the people of Kyebi [a town bordering the Atewa forest], and Ghanaians in general, would have jobs, ”President Akufo-Addo said during a three-day tour of the eastern region in October. 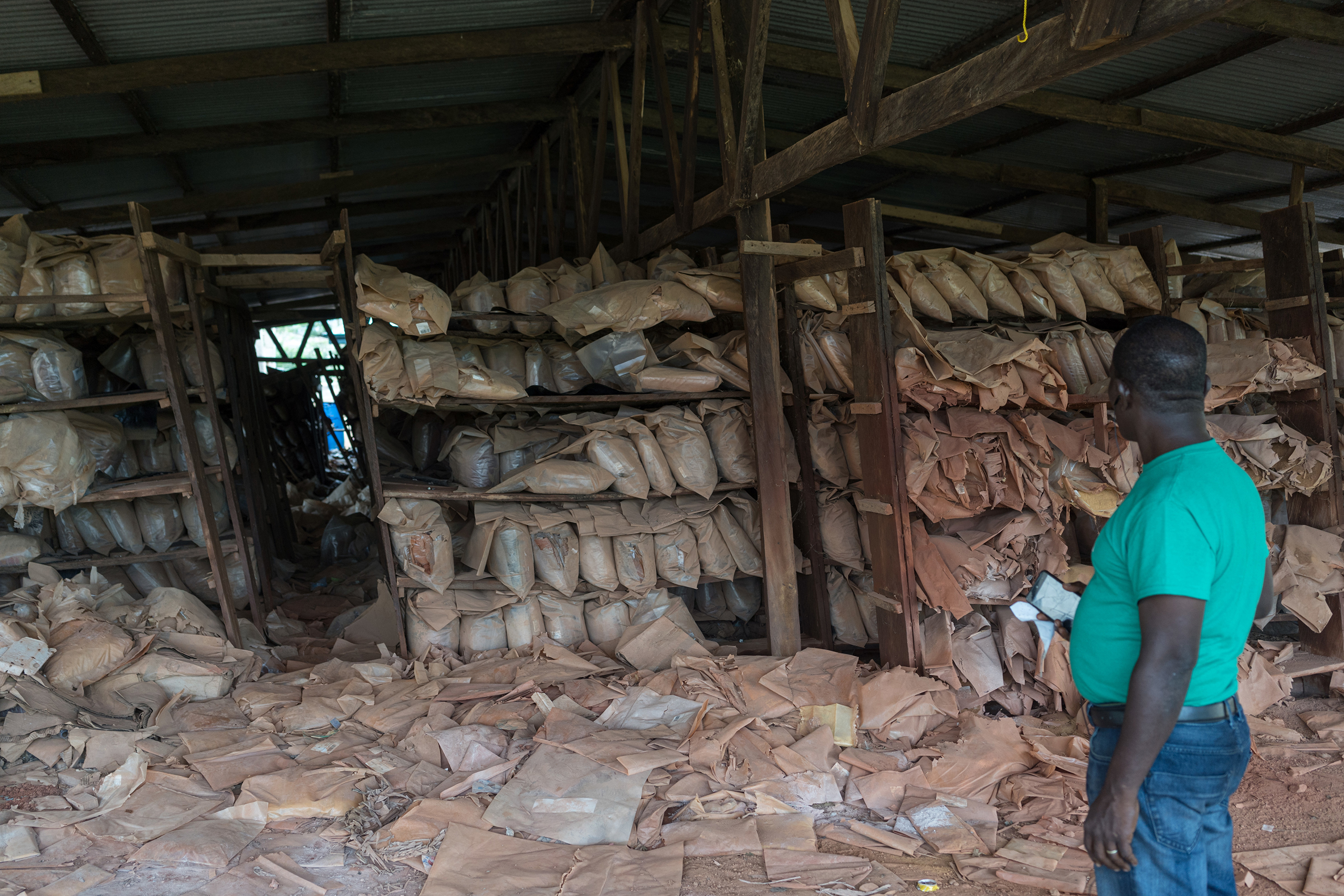 China gave the first batch of money – $ 646 million – to Accra last year, with an additional $ 100 million to be released each year to reach $ 200 million under the deal. Much of that money has already been spent on building road infrastructure amid a fierce campaign for the general election that takes place in December.

Bauxite mining at Atewa has been the subject of discussion for over a decade. “Many attempts have been made to mine bauxite and all of these attempts have not been successful for various reasons, including environmental impacts,” says Tabi.

Please note that all images in this story are copyrighted. They may be reposted as part of this article, but not independently of this one. Credit information should not be changed.