The Wildemount NPC Box includes a number of the Mighty Nein’s greatest friends, and maybe an enemy or two too. There are highlights among this group, including a number of NPCs close to Jester Lavorre, played by Laura Bailey in the series. Jester’s parents, Marion Lavorre (4/9) and The Gentleman (1/9), as well as his Cleric deity of choice The Traveler (9/9). Jester’s close friend Kiri (2/9), the Kenku, is also part of this collection. The detail of all these miniatures perfectly matches the personality of the characters they represent. Marion, the Ruby of the Sea, stands in her beautiful hand-lifted purple dress as she sings at the lavish castle. Alternatively, The Gentleman holds his hand on his hip with his other stretches as if to strike a sneaky deal.

The other miniatures in this box are companions to the Mighty Nein Yussa Errenis (3/9), ‘Hot Boi’ Essek Thelyss (8/9), Orly Skiffback (7/9) the Tortle the Navigator on the Mighty Nein’s ship, Sunbreaker Ulumon (5/9), and the odd man Trent Ikithon (6/9) who is definitely no friend of the Mighty Nein. There are some truly amazing touches that are somewhat hard to notice, but once you do, you’ll enjoy Essek floating slightly above his base in a similar way to how he normally floats at across the world, and the set of Orly pipes further protruding from his right shoulder.

Since the beginning of Critical Role, it’s not uncommon for guest characters to join Vox Machina or the Mighty Nein on their adventures. Sitting down for an episode or an arc, these characters become a beloved part of the fandom. This box of Wizkids Critical Role Painted Miniatures Wave 3 consists of ten of the guest characters who have joined the adventure. 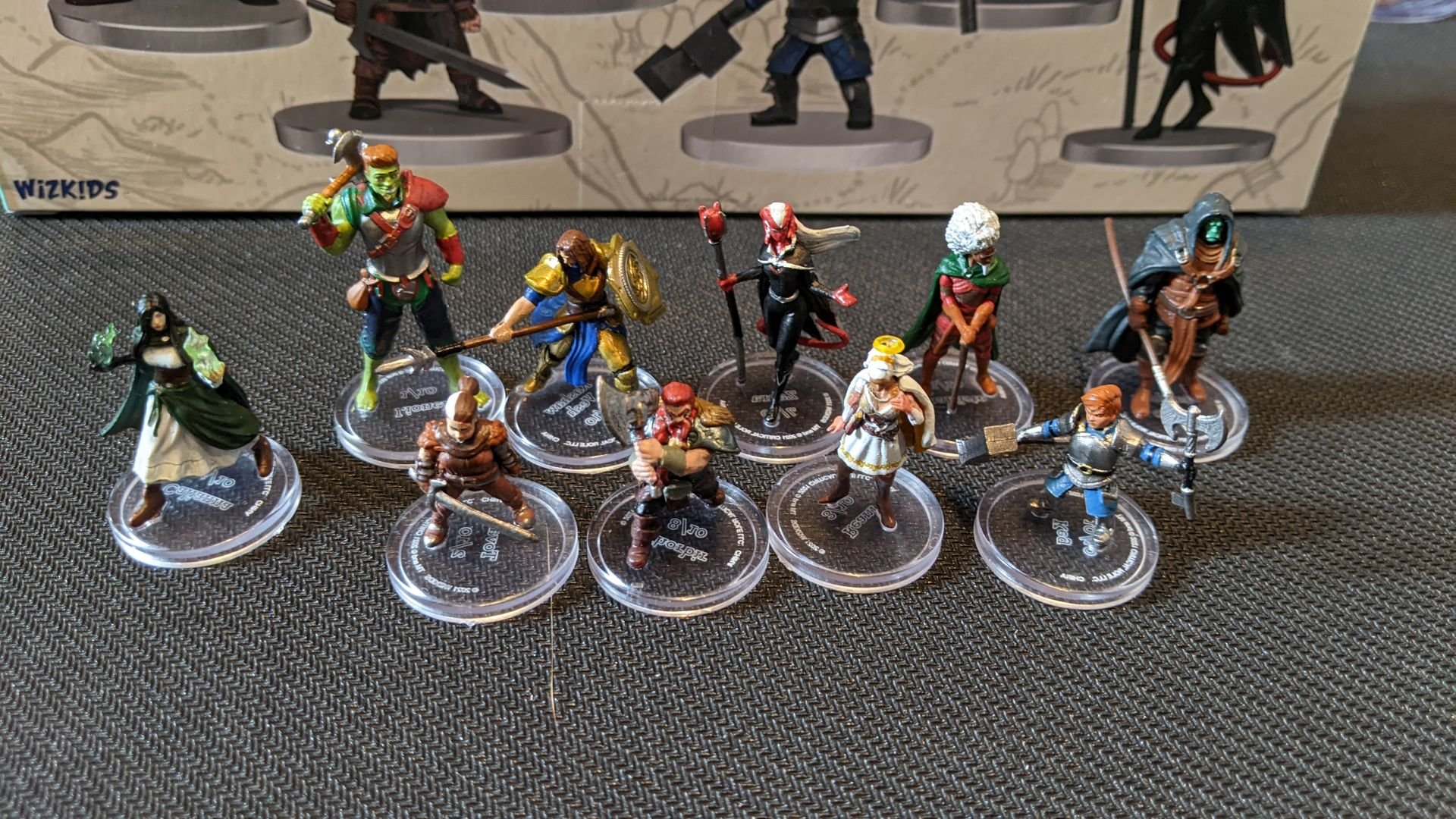 Each of these guest characters is ready for action. Lots of charged spells, weapons drawn, or in Zahra’s case with a stance saying “Just try to come towards me”. The softer plastic used on these figures is simultaneously one of the nicest features of these minis allowing the fabrics on the characters’ capes or hair not to be entirely stiff where the soft plastic doesn’t help. is when it comes to some of the weapons these characters wield. Long weapons like polearms or quarter sticks bend very easily, so you’ll need to be very careful how you leave your minis when not in use.

Continuing on from the Wave 2 Tal’Dorei Set I NPCs, Follow-up Set II is now available. This pack is the only one that focuses solely on the Vox Machina campaign, although some may be familiar if you watched the first season of The Legends of Vox Machina. In this box we will meet members of the Council of Tal’Dorei such as Allura Vysoren (5/12), Lady Kima of Vord (2/12) and Seeker Assum Emring (12/12). Jarett Howarth (3/12) from Emon is also in this pack. Important Vasselheim NPCs such as Victor (4/12) the mining vendor, Earthbreaker Groon (6/12) a Kord monk, and Trial fighter Kern the Hammer (7/12). Once again the poses of the characters match their personalities perfectly, my favorite of the ones mentioned so far is Kern’s battle-ready pose as he brings both hands back as if taunting his opponents. This kind of battle-ready pose can also be seen in Groon and is beautifully juxtaposed against Allura Vysoren with her regal appearance. This box also includes Senokir (8/12), the Fire Genasi that Vox Machina encountered in the City of Copper, and Marquet’s J’mon Sa Ord (10/12). 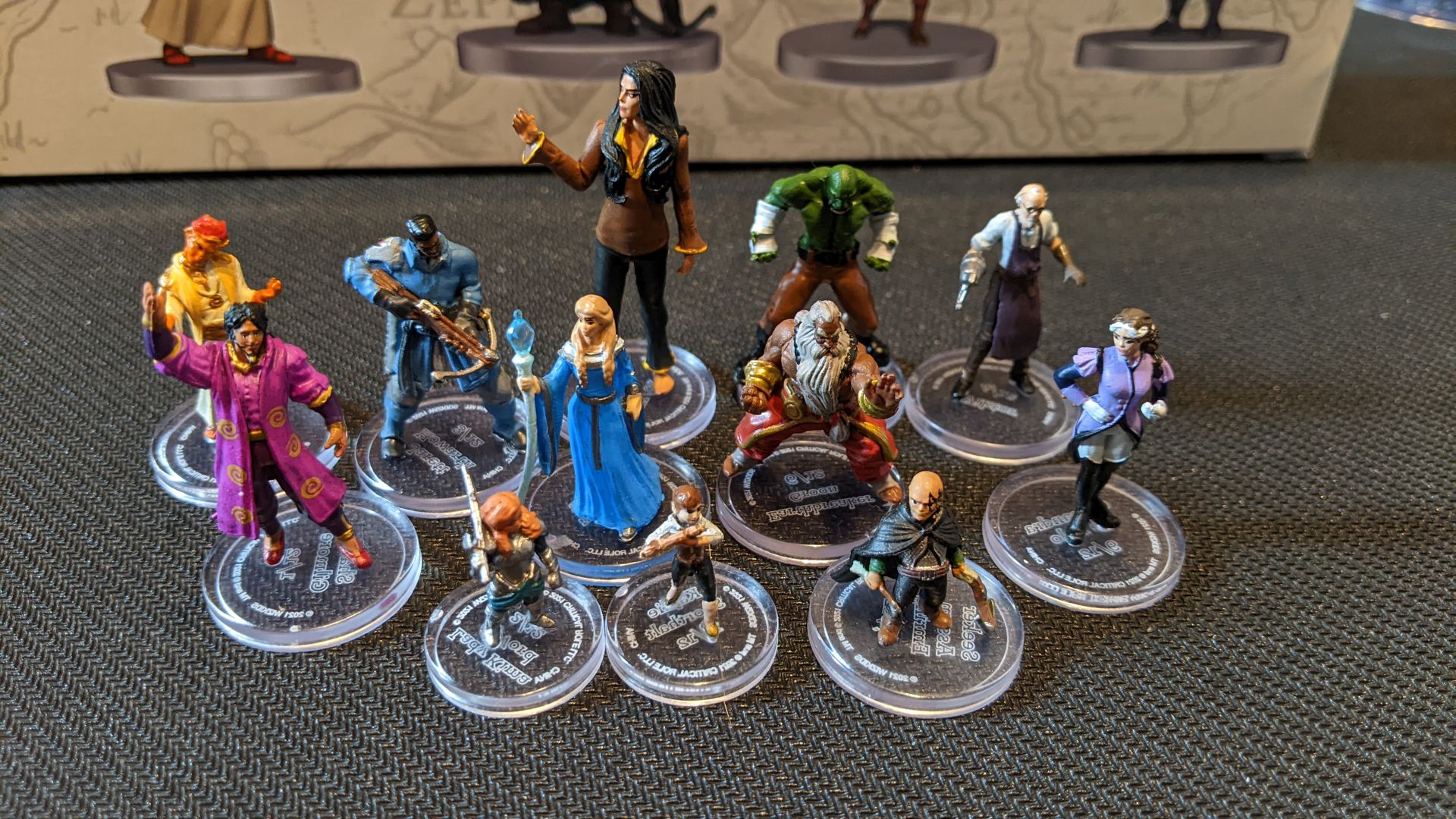 The three most notable NPC miniatures from Tal’Dorei Set II are Kaylie Shorthalt (11/12) daughter of Scanlan Shorthalt, a member of Vox Machina played by Sam Reigel, Cassandra de Rolo (9/12) the submissive sister in the wash of Percival de Rolo’s mastermind, Vox Machina member played by Taliesin Jaffe, and of course the owner and owner of Gilmore’s Glorious Goods, Shaun Gilmore (1/12) himself. Adorned in fantastic purple robes, hand-raised and welcoming, this Gilmore is a must-have for any campaign you’re thinking of running Emon just to have him at the table while your characters shop in his store.

Critical Role of Wizkids – Monsters of Exandria Set I

Moving away from the role-playing characters that filled the world of Critical Role, this section and the next show some of the most dangerous enemies the party has faced. The first two monsters to look at are Osysa (1/8) and Kamaljiori (2/8), the two Sphinxes that Vox Machina encounters under the Slayer’ Take guild hall. There are also a number of NPCs that Vox Machina has encountered in the Feywild, such as Nahla (3/8) the Nymph, Ukurat (4/8), Mystic Iotha (5/8), and Artagan (6/8) l ‘Archfey. Back in the Material Plane, Horis (7/8) and Utugash (8/8) miniatures complete the collection. 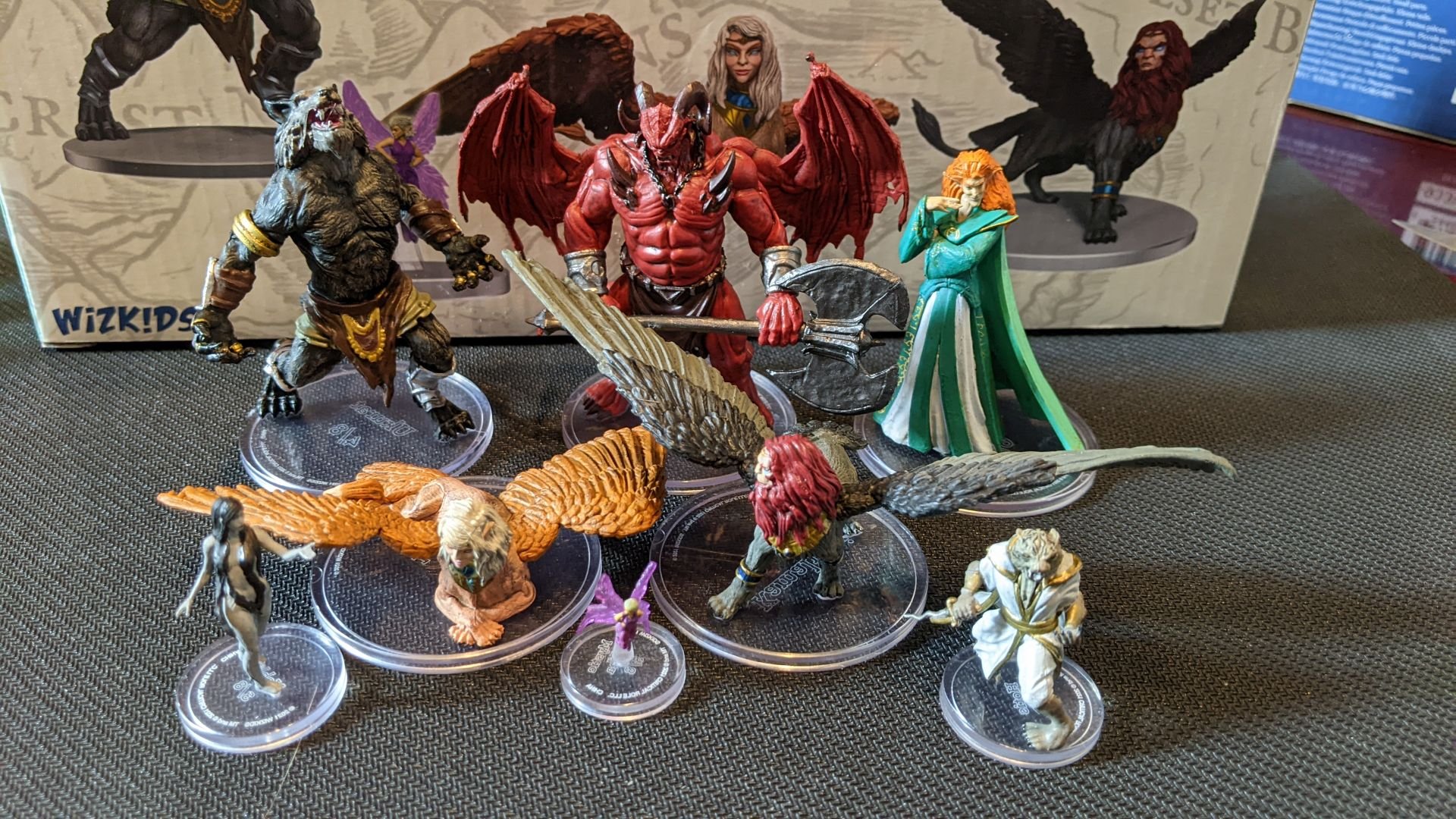 There are a number of notable miniatures in this collection, not only for their looks, but also for their flexibility. The two Sphinxes look like powerful creatures, each posed in a unique way immediately catches the eye, with outstretched wings Kamaljiori shows how tall he is when placed next to a full sized miniature. You can drop these two into any scenario that calls for a Sphinx and it would be a game-changing moment for the campaign, whether they’re having a party with a series of puzzles or pounce on their prey. Utugash the Pit Devil is going to be something your players dread to hit the table too.

It is also interesting to compare the Artagan miniatures from the Monsters of Exandria Set 1 with the Traveler from the Exandria NPCs. The difference between his role as a large creature with flowing red locks as he demonstrates his powerful Archfey abilities and when he becomes a background character and minor deity for the party cleric shrouded in mystery . Having both almost makes the illusion complete between when he keeps his identity hidden and when he decides to show himself.

While the second set monsters aren’t as generic and can only be used in more specific scenarios for Critical Role fans, seeing miniatures for so many amazing enemies in Vox Machina and the Might Nein is definitely worth it. sadness.

From the first campaign, the monsters in this set are Orthax (4/8) the demonic entity that Percy nurtured through his hit list, Sylas Briarwood (5/8) and Delilah Briarwood (6/8), both responsible for the downfall of De Rolo’s house and the murder of Percy’s parents, and Dr. Anna Ripley (7/9), a fellow inventor who takes on Orthax after Percy manages to part with her. Of this set, Orthax’s shadowy figure is absolutely phenomenal. He towers over the other minis and is pure darkness aside from his bird skull. 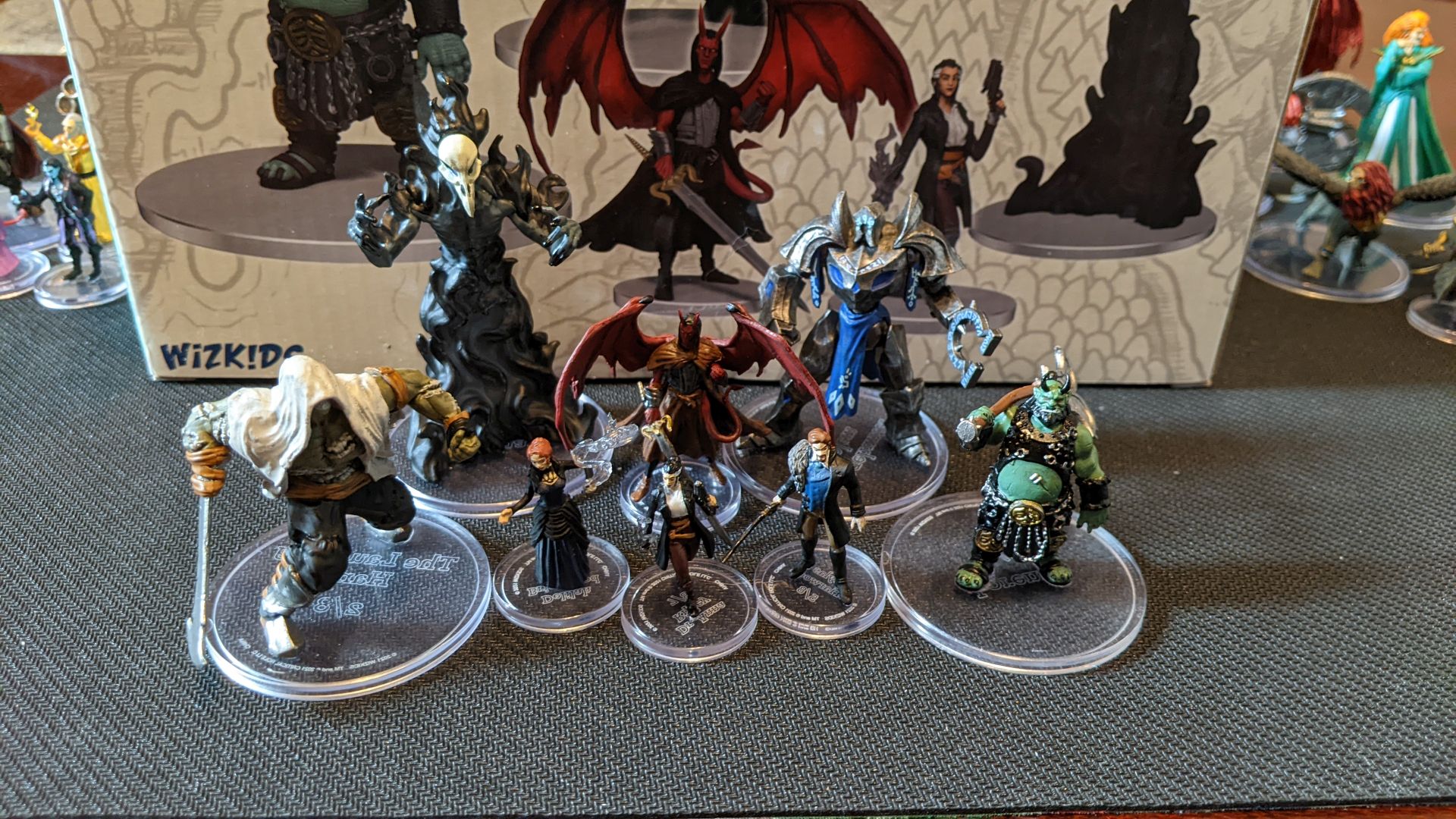 Among the enemies Vox Machina has faced is a figure for Lorenzo (8/8) and a Magehunter Golen (3/8) included but he is immediately overshadowed by the presence of Obann (1/8) and The Laughing Hand (2/ 8). Obann and The Laughing Hand being such pivotal characters that the Mighty Nein faced and suffered frequent losses, they are a fantastic addition to this collection. The details on the Laughing Hand, such as the presence of multiple mouths on its body, are a bit smudged when viewed up close, but on the table it looks fantastic.

The large monster in Wave 3 of the Wizkids Critical Role Painted Miniatures is the Forge Guardian. The Guardian overseeing the Core Anvil, this powerful being, was faced by Vox Machina during the latter part of the first campaign. This miniature far exceeds any standard mini with a base size of a huge creature. Broken chains cascade down his back as sections of his armor glow orange. His sword alone is on par with many standard miniatures. The orange paint on him does a fantastic job of making him look bright, energized, and ready for battle. Even without knowing who he is or what he does, his impressive stature and sturdy dark armor will allow him to assert his dominance in any scenario he finds himself in. 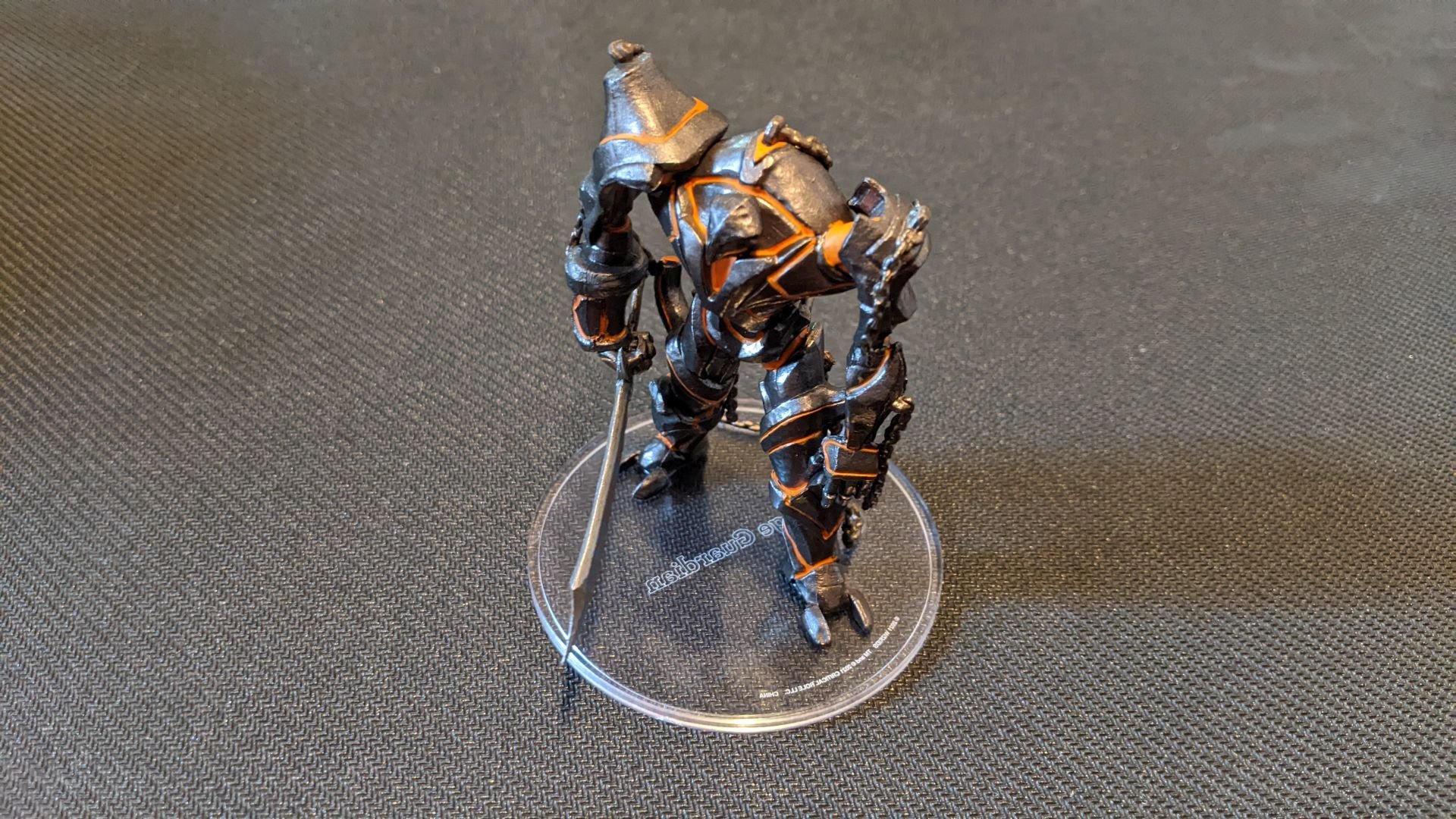 What are our final thoughts on the Wizkids Critical Role Painted Miniatures Wave 3 review?

Once again Wizkids have released a fantastic set of high quality painted miniatures that look like they were ripped straight from Matthew Mercer’s table. There are miniatures in this box for almost every reason you might need them, whether you’re a collector looking to get more ready-to-play critical role memorabilia, or if you’re looking to party the world of action. ‘Exandria and want to fill it with familiar characters. There are some miniatures here that I might find difficult to imagine a scenario where a miniature of them on the table should be present, like Marion Lavorre, which is why it’s beneficial that they look so good. Monsters are really the alluring part of this wave of miniatures that give you plenty of chances to impress your table when you ask them to roll initiative and place a huge-sized creature on the battle map.

Whether you should buy them or which ones you want to buy really depends on what you want to use them for. If you’re interested in having your own thumbnails of your favorite Critical Role guests to watch on a shelf while you rewatch your favorite moments or want to include these characters in your own game, this is worth buying. If you can’t think of a reason why you’d need Kiri to be present in a battle, then maybe you don’t care about the figure.

Among the most used collection for the game that you will get from this wave is in the Monsters of Exandria boxes, these contain such a variety of creatures that you could probably put one in front of your party in the next few months and be satisfied of praise for being an amazing DM. Then again, these monsters can also have their own sentimental value.

If you think you would have a script to use these numbers then go for it, they are worth it.